Thermography vs. Mammography for Early Breast Cancer Detection: Who Benefits Most? 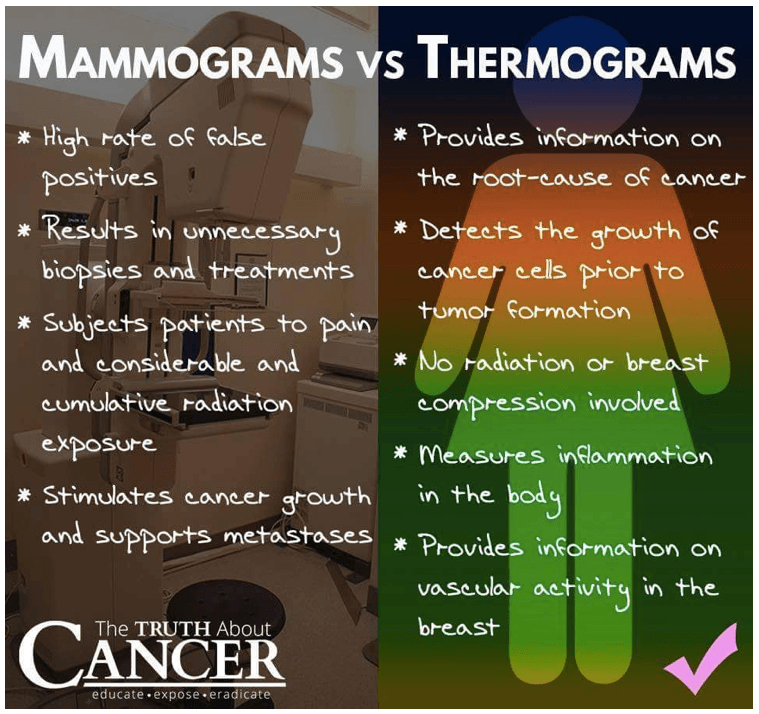 The Dangers, Discomforts, and Lack of Appropriate Detection from Mammogram Screening

So the fear motive of protecting against breast cancer with early detection is easy to understand. And it is used constantly by all government and non-government cancer groups to promote frequent mammograms for women from age 40 and up. It’s considered a standard of care.

Many insurance plans will pay for mammograms fully or with very low co-payments. But there has been growing evidence of harm from mammograms that includes increased over-diagnosis resulting in a significant amount of treatments that were never necessary.

Until 2002, the cancer industry’s standard of care for detecting or “screening” for breast cancer required annual mammograms. All the cancer foundations, organizations, and fundraising groups became cheerleaders for annual mammograms for women aged 40 or 45 and up.

Some were reported to have benefited from mammogram industry financial contributions.

Thermography offers the ability to detect inflammation and suspicious blood vessel activities that point to disease and dysfunction without radiation. It does so by producing 3D color imaging produced from the body’s internal variations of heat in the body.

In other words, instead of sending radio waves into the body to get a picture of what’s going on inside the body, a special extremely sensitive infrared ray camera that does not come into contact with the body “takes a picture” of the infrared energies emanating from the body’s temperature variations.

The thermal radiation’s computer takes the slight thermal variations and creates visual color representations that appear on the machinery’s screen. Those images are then copied for further scrutiny.

And it is able to detect abnormalities that can lead to a disease before the first signs of cancer tumors show up. This allows women to take advantage of lifestyle and dietary changes before cancer tumors appear and avoid chemotherapy, radiation therapies, and mastectomies.

The focus of the mammogram vs thermogram turf war centers on breast cancer. But techniques with thermograms are able to spot markers that are precursors to other cancers and allow natural preventative measures that mainstream oncologists are not trained for and/or don’t want to be.

But not all medical insurance providers will shell out the $200 or less for a breast thermogram. Mammograms cost only slightly less and are uniformly covered by both private and government medical insurers.

Avoiding mainstream oncology’s highly profitable options for treatment may be a major reason why mainstream oncologists constantly assert that thermography cannot detect tumors and is not a bonafide early detection device. It hampers radiologists’ revenue as well.

Although the FDA has approved mammogram machinery and technology, even as an adjunct to mammograms, both the CDC and FDA agree with the same assertions as oncologists that thermograms are not valid substitutes for mammograms with breast cancer screening.

Instead of undergoing chemotherapy or surgery unnecessarily, better diet and supplement choices could easily keep those lesions from becoming cancerous.

But because of thermography’s extreme sensitivity to infrared emissions from slight temperature variations, its images render the earliest signs of breast cancer and/or a pre-cancerous state of the breast.

This allows plenty of time to adjust one’s diet and lifestyle to strengthen the immune system and not be subjected to the coercion and intimidation used by mainstream oncology to force women into chemo or radiation or surgery or mastectomy without a second opinion on treatments.

The myopic perspective of the breast cancer screening technology turf war inhibits the bigger picture of what thermograms provide for other precancerous conditions throughout the body as well as determining gastrointestinal imbalances or inflammatory conditions.

There is even a future for thermograms in dentistry. Thermography is predicted to re-emerge in the near future as a unique research tool in dentistry. (Source)

Thermography imaging eliminates X-rays, so the brain is spared from radiation while allowing better early detection of inflammatory dental conditions before infections occur or for analyzing pathways for dental surgeries.

Over the years at our clinic, we have imaged thousands of women using infrared thermography. In many cases, we have clearly seen cases of inflammation in the dental area using this heat-sensing technology. Many of these cases are caused by a low- grade infection and inflammation and have, through further testing, been attributed to dental or oral issues, such as issues related to root-canal-treated teeth.

Thermography is also highly useful for detecting various dysfunctions and precancerous conditions of the head and neck region, including early thyroid cancer detection while avoiding radiation hazards to the brain.

The unique significance of thermography is it is both a qualitative and quantitative assessment, which can result in pre-emptive early preventative measures as well as monitoring progression or regression of underlying causes of several diseases in a systematic manner.


Can These Common Medical Tests & Treatments Give You Cancer?

Ty Bollinger: So you hear all month this month, it’s breast cancer awareness month, about early detection. You’re saying they should be using thermography instead of mammography. It’s a better early detection technique. Why, in your opinion, are they not using it if it works so much better?

Dr. Ben Johnson: You know there are things that you just want to shoot yourself over that the medical—standard medicine does not do. I’m not much of a conspiracy theory type person. But I’ve come to believe that American medicine is not about helping people get well. It’s about managing disease, and selling drugs and, creating money through the paradigm of patient treatment.

So you can’t talk about cure. You can’t look at getting people well from cancer. They just want to treat them, and then watch them die. It’s really a pretty pathetic state of affairs. So, we are not interested in standard medicine and getting people well; just managing their disease until they die.

For instance, all of the drugs that you see, if you pick up the label, all of the chemo drugs says “causes cancer.” Think about it.

Dr. Ben Johnson: We’re using a drug to treat cancer that causes cancer, a known carcinogen. How crazy is that! But that’s what we do every day in every institution across America. We use radiation. What do x-rays cause? Hello… cancer. And we are using that supposedly to treat it. So you know Stage 4 cancer in America, survival rate is about two percent. You know, that is horrific.

It can’t get any worse than two percent. So two percent success rate for Stage 4 cancers is beyond comprehension. Patients would live much longer and healthier if they did nothing. If they didn’t take the drugs. Because the drugs are hastening their death.

Ty Bollinger: I think you’re already started. I think you’re already going, which I’m enjoying because it’s good information. I’ve read studies, people saying the same thing. Doctors and scientists saying that you would live longer by doing nothing, than by doing the treatment. And, I can’t remember the medical doctor that I was just talking to recently said, that in all his years of treating cancer patients, that he’s never actually seen one that died from the cancer. That they always die from the treatment.

This article is sourced from The Truth About Cancer. The original article is located here.

One of the largest and most meticulous studies of mammography ever done, involving 90,000 women and lasting a quarter-century, has added powerful new doubts about the value of the screening test for women of any age.

It found that the death rates from breast cancer and from all causes were the same in women who got mammograms and those who did not. And the screening had harms: One in five cancers found with mammography and treated was not a threat to the woman’s health and did not need treatment such as chemotherapy, surgery or radiation.

The study, published Tuesday in The British Medical Journal, is one of the few rigorous evaluations of mammograms conducted in the modern era of more effective breast cancer treatments. It randomly assigned Canadian women to have regular mammograms and breast exams by trained nurses or to have breast exams alone.

“It will make women uncomfortable, and they should be uncomfortable,” said Dr. Russell P. Harris, a screening expert and professor of medicine at the University of North Carolina, Chapel Hill, who was not involved in the study. “The decision to have a mammogram should not be a slam dunk.”

The findings will not lead to any immediate change in guidelines for mammography, and many advocates and experts will almost certainly dispute the idea that mammograms are on balance useless, or even harmful.

Dr. Richard C. Wender, chief of cancer control for the American Cancer Society, said the society had convened an expert panel that was reviewing all studies on mammography, including the Canadian one, and would issue revised guidelines later this year. He added that combined data from clinical trials of mammography showed it reduces the death rate from breast cancer by at least 15 percent for women in their 40s and by at least 20 percent for older women.

“It might be possible that mammography screening would work if you don’t have any awareness of the disease,” she said.

The Canadian study reached the same conclusion about the lack of a benefit from mammograms after 11 to 16 years of follow-up, but some experts predicted that as time went on the advantages would emerge.

That did not happen, but with more time the researchers could, for the first time, calculate the extent of overdiagnosis, finding cancers that would never have killed the women but that led to treatments that included surgery, chemotherapy and radiation.

Many cancers, researchers now recognize, grow slowly, or not at all, and do not require treatment. Some cancers even shrink or disappear on their own. But once cancer is detected, it is impossible to know if it is dangerous, so doctors treat them all.

Mammography’s benefits have long been debated, but no nations except Switzerland have suggested the screening be halted. In a recent report, the Swiss Medical Board, an expert panel established by regional ministers of public health, advised that no new mammography programs be started in that country and that those in existence have a limited, though unspecified, duration. Ten of 26 Swiss cantons, or districts, have regular mammography screening programs.

Dr. Peter Juni, a member of the Swiss Medical Board until recently, said one concern was that mammography was not reducing the overall death rate from the disease, but increasing overdiagnosis and leading to false positives and needless biopsies.

“The mammography story is just not such an easy story,” said Dr. Juni, a clinical epidemiologist at the University of Bern.

Even experts like Dr. H. Gilbert Welch, a professor of medicine at Dartmouth, who have questioned mammography’s benefits were surprised by Switzerland’s steps to reconsider its widespread use.

In the United States, about 37 million mammograms are performed annually at a cost of about $100 per mammogram. Nearly three-quarters of women age 40 and over say they had a mammogram in the past year. More than 90 percent of women ages 50 to 69 in several European countries have had at least one mammogram.

Dr. Kalager, whose editorial accompanying the study was titled “Too Much Mammography,” compared mammography to prostate-specific antigen screening for prostate cancer, using data from pooled analyses of clinical trials. It turned out that the two screening tests were almost identical in their overdiagnosis rate and had almost the same slight reduction in breast or prostate deaths.

“I was very surprised,” Dr. Kalager said. She had assumed that the evidence for mammography must be stronger since most countries support mammography screening and most discourage PSA screening.